The other day I reached for a golf ball in my bag when teeing off on the 1st hole at my home club. I haven’t really wondered about it before, but I came to think about how many dimples there are on a golf ball?

I decided to investigate, and the answer is quite astounding. Read more about it below – along with an explanation of what the dimples really do.

So how many dimples are there really on a golf ball? Well, it depends. The usual number is between 300 and 400 with balls ranging anywhere in between, depending on brand and how the ball is developed.

But the most common numbers are 328 (Titleist ProV1x), 332 (Callaway Chrome Soft) and 322 (TaylorMade TP5) and around those numbers.

But you might ask yourself why golf balls even have dimples, and how they came to be.

Why Do Golf Balls Have Dimples?

It all started around the middle of the 1800s where the golf ball made from gutta-percha sap, the so-called “guttie” was born. It was a smooth ball, but flight was inconsistent when it was new.

Then as a round of golf progressed and the ball got more and more scuffed, it started to fly straighter and longer. That’s how golfers realized that an uneven surface was much better than a smooth one.

Then came a lot of experimenting and the first real dimples were actually protruding from the ball. This made for quite some challenges when putting because the ball would be sent off in various directions.

Soon after that the dimples as we know them today were developed and golf balls looked much like they still do to this day.

You can read more about what golf balls are made of here.

Is Dimple Count And Depth Important?

Given that dimple count on golf balls varies so much, one might think that it is important how many there are.

There is no golden number hence all manufacturers use different numbers.

The number of dimples directly corresponds to the dimple size and pattern. For the developers of golf balls it is important to cover as much of the surface in dimples as possible, to enhance the aerodynamic capabilities of the ball.

Equally important to choosing the right number and pattern of the dimples is the depth of them.

By changing dimple depth just by 0.001 inches it will greatly impact the trajectory and overall distance that the ball can travel.

An interesting study shows that dimple depth has a great impact on the airflow around the ball.

In this experiment 11 golf balls were made with the same 336 dimple count and evenly distributed pattern. They also made a totally smooth ball.

When comparing the balls in a wind tunnel it was apparent that the ones with deeper dimples produced a lot of initial drag and more turbulence around the ball.

The smooth ball produced less significant initial drag and didn’t enforce a phase change of the airflow around the ball.

It all gets very scientific in this paper, so here’s a video with some good visuals on what Reynolds number is, and what kind of forces that are present when talking aerodynamics.

You can’t say that all golf balls have the same dimple count. There’s no rules about the number of dimples on a golf ball, just the diameter and weight of it.

You might also ask yourself how many dimples there are on a pga golf ball, but it makes no difference if it’s a ball for pros or amateurs.

So a golf ball doesn’t have a fixed amount of dimples, it is determined by the manufacturer. Below are some examples of dimple patterns.

If you’re interested in a specific golf ball dimple chart, check out this site where almost every ball imaginable is listed.

The dimple pattern of a golf ball is something that there is a lot of focus on in the industry, but nobody really knows or can prove the effect of them.

Each manufacturer has their own way of making the dimples, and they all claim that their way is the best.

You cannot tell for sure, but have to rely on the performance of the ball in your own game.

Here you can see some examples of dimple patterns, and you can also look at the manufacturer’s website for more information on the actual ball you’re interested in.

There are no rules specific to golf ball dimples. But there are three things that manufacturers need to adhere to:

You can read more here.

How Many Golf Balls Are Made Each Year?

Naturally this number is estimated, since the vast amount of golf balls manufactured each year is practically impossible to count.

Each year 850 million golf balls are manufactured in the U.S. alone.

The global market share with regards to golf balls were around $1.11 billion in 2017 with a projected increase through 2025.

Most of the market share is held by 4-piece balls, then comes 3-piece and lastly 2-piece. 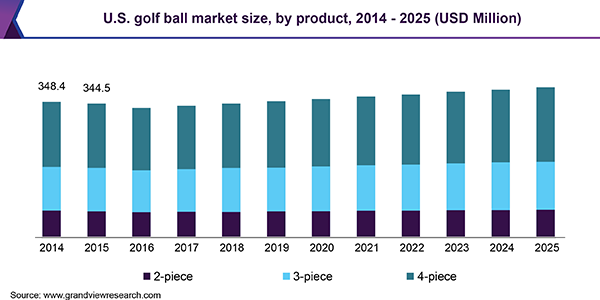 What Golf Ball Has The Most Dimples?

Are many dimples better than fewer dimples? Who knows. Dimplit marketed their 1070 balls as the golf ball with the most dimples in the world.

The breakthrough in the golf world hasn’t come for Dimplit, so maybe it’s just a gimmick to stand out in the market. There’s no dissatisfaction amongst those who’ve tried it tough.

What Is The Best Golf Ball For Me?

Only you can answer this – and you can’t do it before you’ve tried a lot of different balls.

Before buying a dozen of each at your local PGA shop – you should do some groundwork to get dialed in as good as possible.

We’ve helped you in this matter, and you can check out our ultimate guide to the best golf balls right here.